'Masculinity and Danger on the Eighteenth-Century Grand Tour', by Sarah Goldsmith

By Sarah Goldsmith (University of Edinburgh) 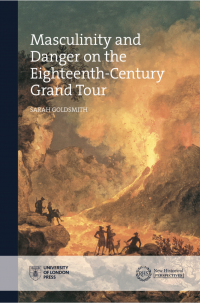 The Grand Tour was a journey to continental Europe undertaken by British nobility and wealthy landed gentry during the seventeenth and eighteenth centuries. As a rite of passage, the Tour also played an important role in the formation of contemporary notions of elite masculinity.

Examining testimony as written by Grand Tourists, tutors and their families, Sarah Goldsmith demonstrates that the Grand Tour educated elite young men in a wide variety of skills, virtues and masculine behaviours that extended well beyond polite society. She argues that dangerous experiences were far more central to the Tour as a means of constructing Britain’s next generation of leaders than has previously been examined. Influenced by aristocratic concepts of honour and inspired by military leadership, elites viewed experiences of danger and hardship as powerfully transformative and therefore as central to the process of constructing masculinity.

Far from viewing danger as a disruptive force, Grand Tourists willingly tackled a variety of social, geographical and physical perils, gambling their way through treacherous landscapes; scaling mountains, volcanoes and glaciers; and encountering war and disease. Through this innovative study of danger, Goldsmith offers a revision of eighteenth-century elite masculine culture and the critical role the Grand Tour played within this.

Dr Sarah Goldsmith is lecturer in urban and material culture history at the University of Edinburgh, having previously held a Leverhulme Early Career Research Fellowship at the University of Leicester. Read more about Sarah's book on the Institute of Historical Research blog 'On History' (November 2020).

3. Wholesome dangers and a stock of health: exercise, sport and the hardships of the road

5. Dogs, servants and masculinities: writing about danger and emotion on the Grand Tour